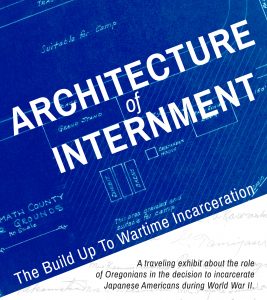 (Hillsboro, Oregon) – “The Architecture of Internment: The Buildup to Wartime Incarceration” exhibit will visit the Walters Cultural Arts Center Theater as part of their Speaker Series — for a one-night pop-up event on Tuesday, October 17, 2017 from 7-8:30 pm at 527 East Main Street in Hillsboro. In commemoration of the 75th anniversary of Executive Order 9066, this deeply moving and celebrated exhibition is touring locations throughout the state to share the heartbreaking history of internment of Oregonians of Japanese ancestry during WWII.  It tells the story of how individuals, organizations, businesses and elected officials advocated for the incarceration of Oregonians of Japanese ancestry or stood by while it happened—as well of the story of those who spoke against it. The exhibit covers the time period leading up to incarceration (1941-1942) through actual documents of the time: letters, resolutions, blueprints, photographs and other archival documents from across the state of Oregon. Anne Galisky of Graham Street Productions and special guest speakers will introduce and provide context for the exhibit. For one night only, visitors will have the chance to explore the exhibit at their own pace in the Walters’ theatre.

This exhibit has a special connection to the Walters Cultural Arts Center’s building in downtown Hillsboro, which was previously the First Trinity Lutheran Church. The red stone that gives the building its iconic look and enduring beauty was made possible by the help of volunteers who hauled the stone from a quarry in 1949. Among these volunteers were the brothers of George Iwasaki, a Japanese-American and Hillsboro resident whose family lost their farm during the war and became a laborer for sugar beet and onion farms in Eastern Oregon to evade the internment camps.

“Unlike many Japanese families, the Iwasakis recovered their farm after the war. Herman and Edward Freudenthal, brothers who lived on either side, had maintained it for them. (The Iwasakis lost land in Helvetia). Later, George’s brothers drove the farm’s flatbed truck to Camas, Wash., to haul the red lava rock to build the first Trinity Lutheran Church [now the Walters Cultural Arts Center] on the Freudenthal land.”  [Oregonian]

Other story related to Hillsboro family affected by internment:

In this exhibit, visitors will see:
– Personal letters and proclamations from Oregonians to Governor Sprague in 1941 and 1942, advocating for the exclusion and incarceration of Oregonian Japanese Americans.

– The Oregon Governor’s response to these letters and proclamations revealing his changing position under political and social pressure.

– Blueprints of potential “Assembly Center” and “Relocation Camp” locations such as race tracks and fairgrounds.

– Letters from Japanese Americans expressing outrage about the injustice.

What people are saying about this exhibit:

“What Graham Productions has done is more important than merely constructing an exhibit for viewing.  They have constructed a story line and have captured a time in history.  Most importantly they have produced something that generates emotion, and strong emotion by the viewer, and just as importantly it generates a sensitivity and a care and concern for these people who suffered.”

“It is so heartbreaking and terrifying and so, so important to bear witness to the tragedies of history and today.”

“It made us better understand our own individual histories and allowed us to connect with other communities who have faced discrimination and adversity. Made us feel more connected as API’s!”

“The exhibit had tremendous educational value. Many students had assumed that people were uncomfortable with the prospect of Japanese American internment, when in reality, much of the population supported FDR’s order. Overall, it was a great experience for the students and one they won’t soon forget.”

The Walters is a ground-breaking home for creativity and culture providing expanded opportunities for the entire metro area community, including increased access to exceptional performing and fine arts experiences located just two blocks off the MAX Blue line in historic downtown Hillsboro. Many thanks go to Walters Concert series Sponsor,The Orenco Hotel and First Tuesday sponsor, Decadent Creations Bakery — whose generosity and support have made it possible to enhance the Arts Center’s offerings and services.