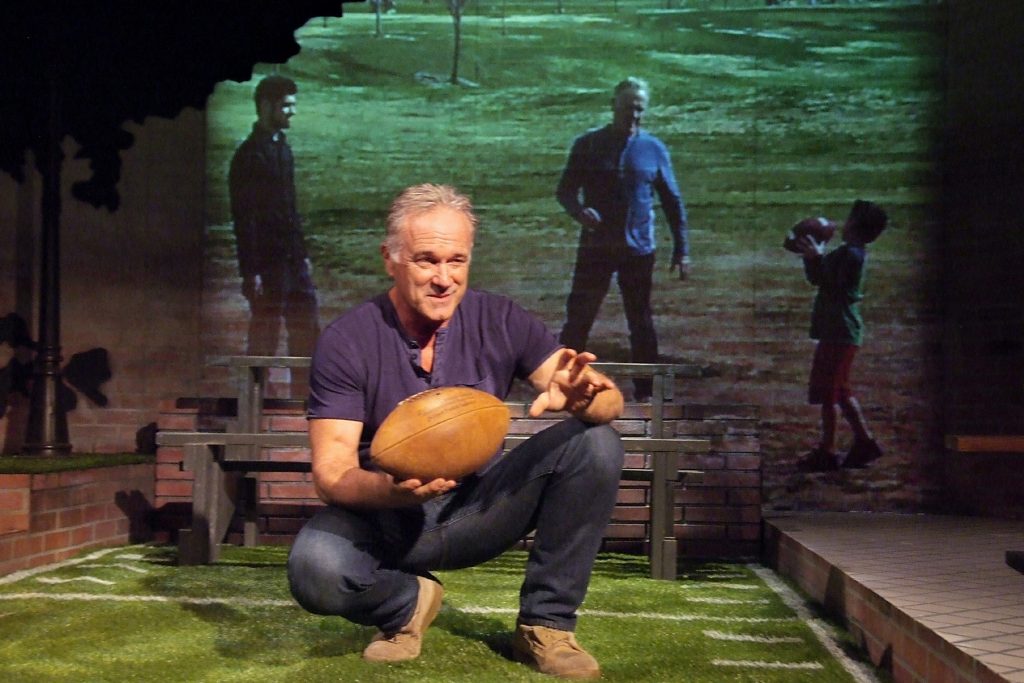 Welcome to Tupelo County Georgia, where the local Easter Egg hunt takes on legendary, Super Bowl proportions and where a certain father might pay the local egg hunt organizing committee under the table to secure his son’s entry into the event. Meet that father – Ed Sanford – who has his own ideas as to why Humpty fell off the wall….”He wasn’t mentally prepared.”

The Vault Theater and Event Space, in partnership with LA-based Theatre Planners Tours, is proud to present the hit one-man show Father, Son & Holy Coach, for one night only on Friday November 2, 2018 at 7:30pm. Friday night football is the motif that illuminates a father/son journey gone hilariously off the rails. Over the course of the 90 minutes, John Posey, a popular television and film actor who confesses he was shaped by a complex and conflicted relationship with his own father, seamlessly portrays over two dozen different characters — the entire town of Tupelo County, Georgia.

“It’s a very funny, but also poignant, study of the fragile psyche of an aggressively overprotective father,” explains Posey. “This man’s main reason for living is to prevent his child from experiencing what he perceives to be life’s failures. Finally, after years of trying to live up to his father’s expectations, the son must go his own way.” Posey debuted Father, Son & Holy Coach to rave reviews in 1993 (“Wonderful… much humor drawn from real people” — Daily Variety ; “A funny and absorbing chronicle of a fanatical father’s attempt to rear a gridiron superstar” —Los Angeles Times) and has since toured it all around the country.

Posey’s real life son, Tyler Posey, (best known as Scott McCall on the MTV series Teen Wolf), is one of the co- producers of the show. “This is a father/son story, and the production is a father/son endeavor,” Posey says. A graduate of the University of Florida, Posey grew up in Florida, Georgia and Oklahoma. He first came to the attention of network casting executives who discovered him on stage with the Atlanta-based comedy group, “Comedia,” a group Posey co-founded in the ‘80s, and brought him to Los Angeles. Since then, John has compiled a long list of credits that includes recurring roles on How to Get Away with Murder and Teen Wolf and guest starring appearances on Criminal Minds, 24, Boston Legal, NCIS, Scorpion, ER, Seinfeld, Manhunter, From the Earth to the Moon and Newsradio among others. Father, Son & Holy Coach is a show for all ages and all interests; moms and dads, teenagers, football fans and football widows. “It is often riotously funny and at other times it will bring tears to your eyes,” says Posey. Father, Son & Holy Coach will be performed one-night only, on Friday November 2nd, at The Vault Theater and Event Space in downtown Hillsboro. Tickets are on sale now at bagnbaggage.org or by calling the box office at 503 345 9590, ext. 1.

Masque Alfresco Auditions for Importance of Being Earnest