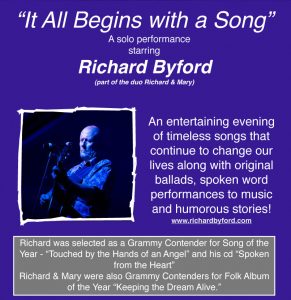 Richard was part of the duo RICHARD & MARY for 46 years
RICHARD & MARY WERE GRAMMY CONTENDERS
FOR THE 57th ANNUAL GRAMMY AWARDS for their cd “Keeping the Dream Alive” for Folk Album of the year.  Richard’s song “Touched by the Hands of an Angel” was a contender for Song of the Year in THE 58th ANNUAL GRAMMY AWARDS.  RICHARD’S cd “SPOKEN FROM THE HEART” was also a Grammy Contender in the Spoken Word category.