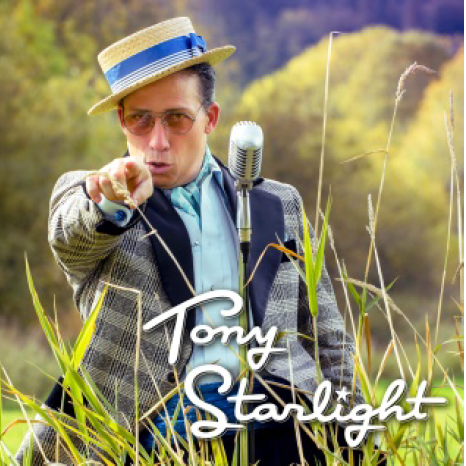 Razzmatazz, swingin’ arrangements, razzle-dazzle, and a lot of jazzy impressions of the world’s greatest singers and entertainers: this is essentially the definition of the one and only Tony Starlight, Portland’s premiere old-school nightclub entertainer. Tony and his amazing group of musicians, singers, and dancers make their triumphant return to Hillsboro’s Vault Theater and Event Space for three dynamic performances on November 8, 9, and 10. After last year’s sell-out performances, Hillsboro audiences know all about the charm, fun, and skill that Tony brings to each and every performance.

The first of the three performances is Neil Diamond: Storytellers on Thursday November 8th at 7:30pm. Tony is infamous for his Neil Diamond impression, and he not only performs the greatest hits of Neil Diamond, but also tells the stories behind the songs. The Oregonian says of the Diamond Tribute show, “Wearing a shaggy black wig, sporting a sparkly shirt, tight pants and a bejeweled belt buckle reading “SEXY,” Tony Starlight saunters onstage, into the spotlight, while the band plays….Starlight sells Diamond’s songs with sincere, professional flair, with humor layered into the concept.”

The second show is Salute To The Stars of The Copa on Friday November 9th at 7:30pm. Audiences will relive the glamour of the world’s greatest nightclub in its heyday, New York City’s famed Copacabana! Tony and a swinging septet perform a night of tributes to the legendary entertainers who graced the stage at the legendary Copacabana. Signature hits by artists such as Frank Sinatra, Dean Martin, Sammy Davis Jr., Bobby Darin, Tom Jones, Jimmy Durante, Nat King Cole, Tony Bennett, and more will be performed by Tony and the band, while the fabulous Copa girls dance across the stage in stunning costumes.

Finally, on Saturday November 10th at 7:30pm, is AM Gold: Seventies Soft Rock. Tony and his team make an evening out of performing songs from the stalwarts of the AM dial in the 1970s. Artists like Elton John, Neil Diamond, Carole King, Jim Croce, Little River Band, Carly Simon, Gordon Lightfoot, Paul Simon, Barry Manilow, and Billy Joel. Hits like “Brandy (You’re A Fine Girl)”, “Dancin’ In The Moonlight”, “Welcome Back”, “Seasons In The Sun” and many
more.

“We are always shocked at how the audience seems to know all the words to every song in our playlist. To hear the crowd sing “give me the beat boys and free my soul, I wanna get lost in your Rock n’ Roll and drift away” is magical. It’s like a big campfire sing-along, K-Tel style,” says Starlight. Tony Starlight performs all of his shows with a live band and never with any pre-recorded tracks. Tickets for all shows are $30 and are on sale now at bagnbaggage.org or by calling The Vault Theater Box Office at 503 345 9590.

A Little Night Music featuring the music of W.A. Mozart

The Lasses & Kathryn Claire in Concert